But one thing you, me, and everyone else can very well remember is the “hope”. Every new year starts with so much of hope, so many dreams, and plans waiting to be executed.

That’s where it got really tricky for all of us. As we all entered the JFM quarter, we realized it is no ordinary year. 2020 came and went only after giving us many lessons including but not limited to:

It was no different for us at The Test Tribe. Saying that I won’t say there was nothing good about 2020. I am thankful for the very lessons it taught us all and the push it gave to explore new horizons that we were not thinking about.

We at The Test Tribe started the year 2020 with so many plans around the expansion to many Tier-II cities, doing more Meetups, experimenting with more formats and ideas, bringing even more value to the Community through offline events.

We also wanted to do a few more TestAway editions and experiment with the TestAway format as well (we had some pretty solid ideas in the bag). We saw distantly that we may end up doing a conference or two in a year but in offline space.

We thought The Bug Feast Hackathons including other exclusive offline hackathons still would be things to do throughout the year. And we of course thought we will continue doing offline workshops.

For us, our year started with The Testing Lab Bangalore, followed by our 9th Pune Meetup. 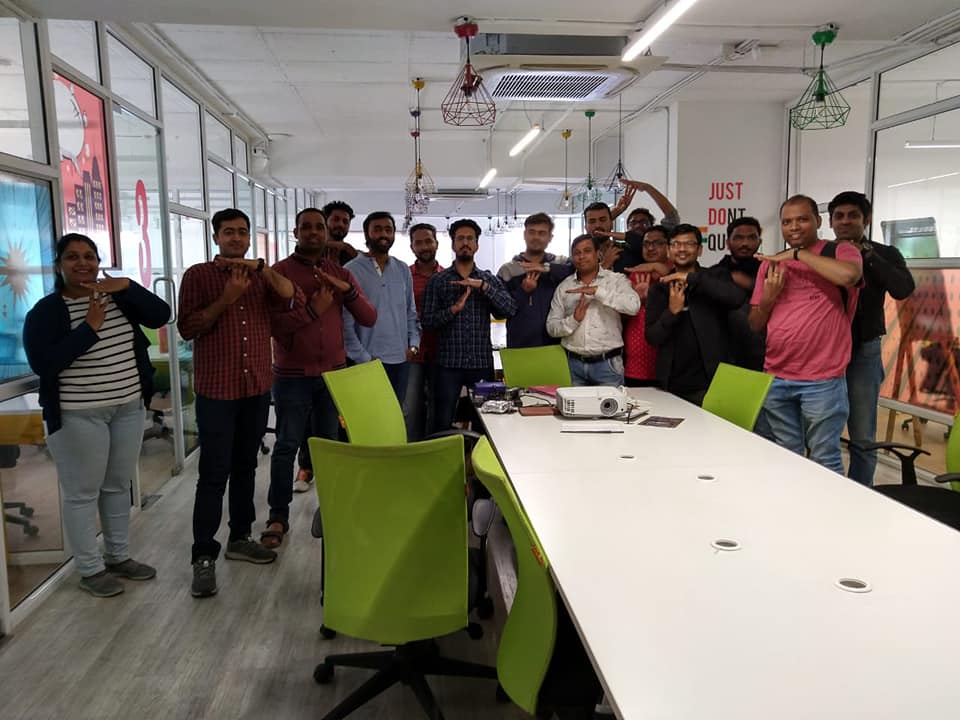 Things only got interesting from there as we planned for Cignithon, an exclusive Software Testing Hackathon we did with Cigniti in Hyderabad. It turned out to be the biggest offline Software Testing Hackathon the country has ever seen to the best of our knowledge. It saw ~118 Testers from 52+ Companies at the venue, competing with each other for the awards worth INR 200000 with fame and learning worth much more.

February and March were still going ok for us in India as we all were hooked to scary news coming from other countries. We managed to do another Testing Lab workshop in Mumbai and our 4th Chennai Meetup during that period before things came to standstill. 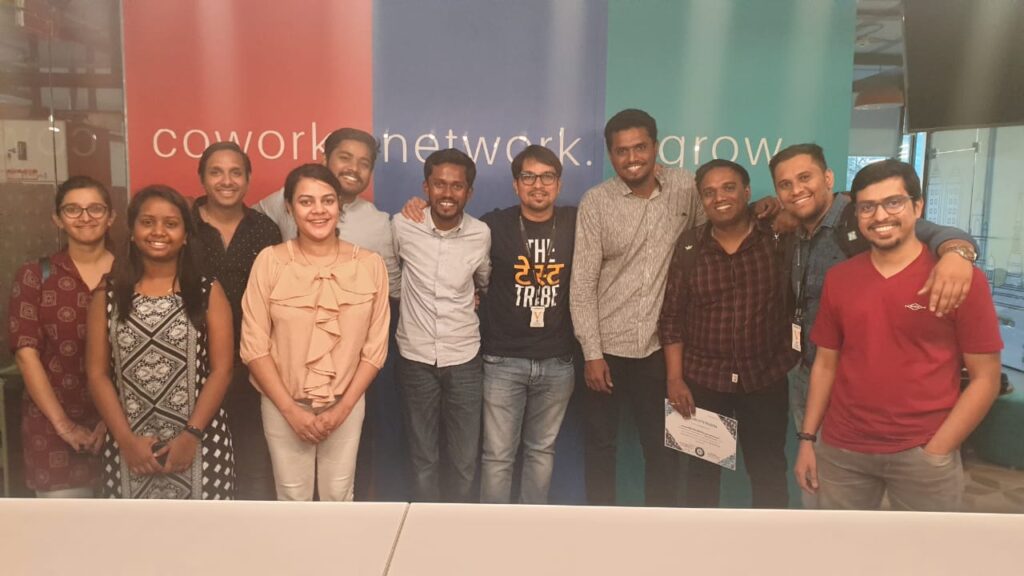 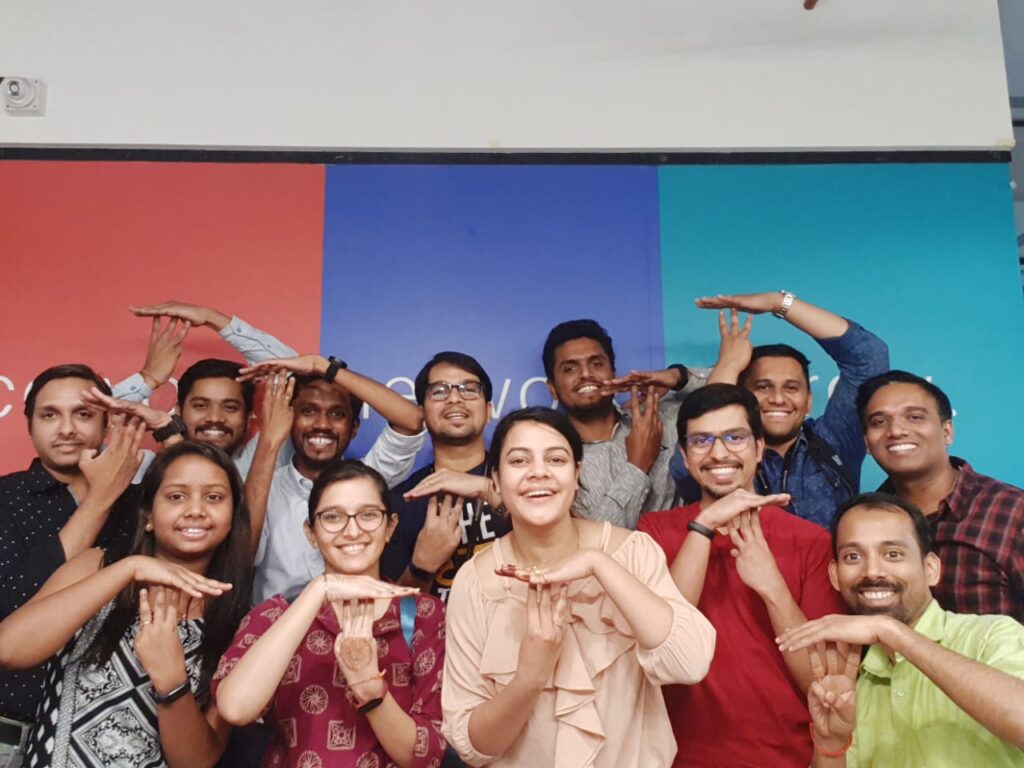 When the first lockdown began, we all thought the entire Covid19 fear is here only to last for a few weeks, and then everything would be normal right? 😉 We were proved wrong and proved how insignificant we humans are in a larger scheme and that we should not take us very seriously, and instead take Nature seriously.

In the hope things will get to normal, we continued doing webinars, did an AMA with Jonathan Lipps, and shifted our workshops to an online format for the first time.

April and May however was a real game-changer for us, as we planned for Tribal Qonf for the month of June. A 2-Day Virtual Conference with 20 Speakers giving Talks, a micro Workshop, an Expert Panel, and a Fireside Chat. We never thought we will do a virtual conference anytime soon but here we were. Once we committed to it, our aim was to give it our best possible. 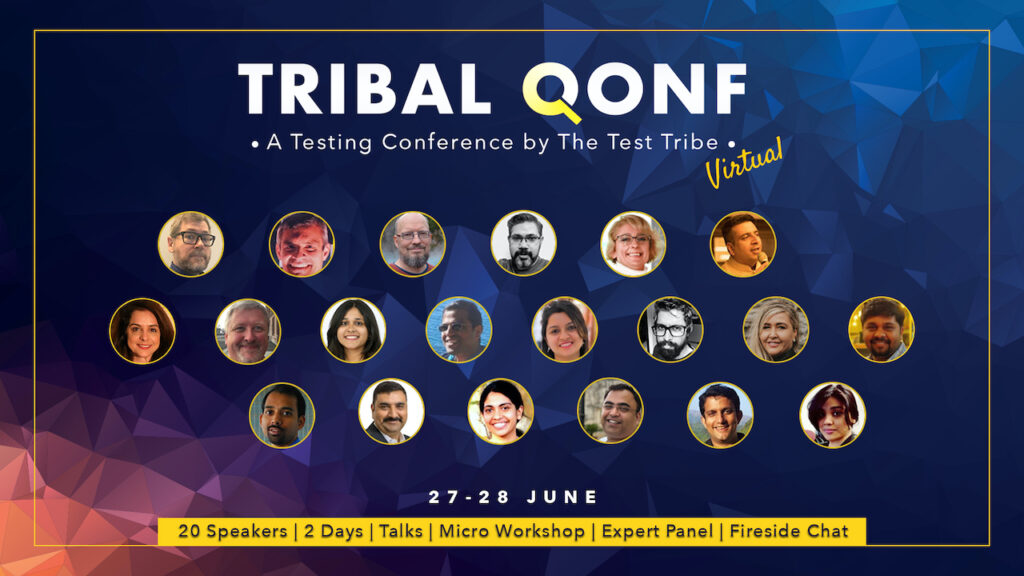 Meanwhile, we also did a Virtual Automation Hackathon with HeadSpin and HeadSpin University. And yes, how wonderful it was to host Deep Kalra (Founder of MakeMyTrip) in the award ceremony of this hackathon. 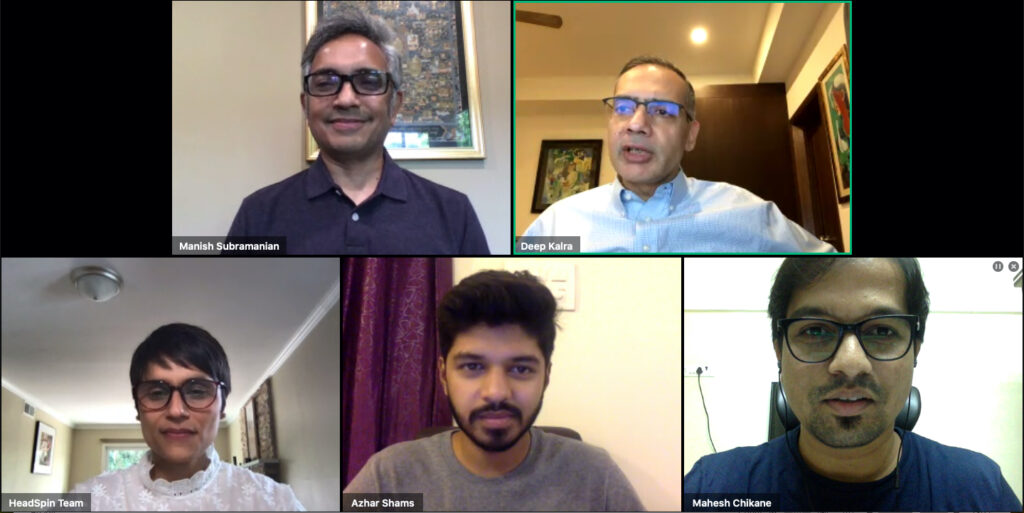 Coming back to Tribal Qonf, it really became one of the best Software Testing Conference of the year and we could not be more proud.

We were on cloud9 after hearing all the beautiful feedback for Tribal Qonf got really excited for the journey ahead.

On a personal level, I connected with around 20 tribals during this time through Tribal Connect and tried my bit to make their lives better. Feel fortunate to know their story.

As we were cruising through the year, we got an adrenaline rush again when the idea of doing something big which involves as many Countries on Earth as possible came forward.

This discussion started on the 2nd of September, and on the 12th of September #TestFlix was live.

With TestFlix we experimented with many things and one of them was pre-recorded Atomic Talks of around 8 minutes each. We weaved them all together to form one big amazing movie, rather an uninterrupted Series as it was 17 hours long non stop binge.

Our aim was to get at least 100 Speakers for TestFlix from at least 40 Countries.

We surpassed that with 107 Speakers from 44 Countries. And imagine a conference of this scale stays free to attend.

You may want to read TestFlix Roundup here.

You can also find all the TestFlix Atomic Talks here.

TestFlix surpassed even the love Tribal Qonf had received and became the most talked-about Software Testing Event of 2020.

We are still not completely out of the love and the amazing feedback we received.

We continued doing our routine events. 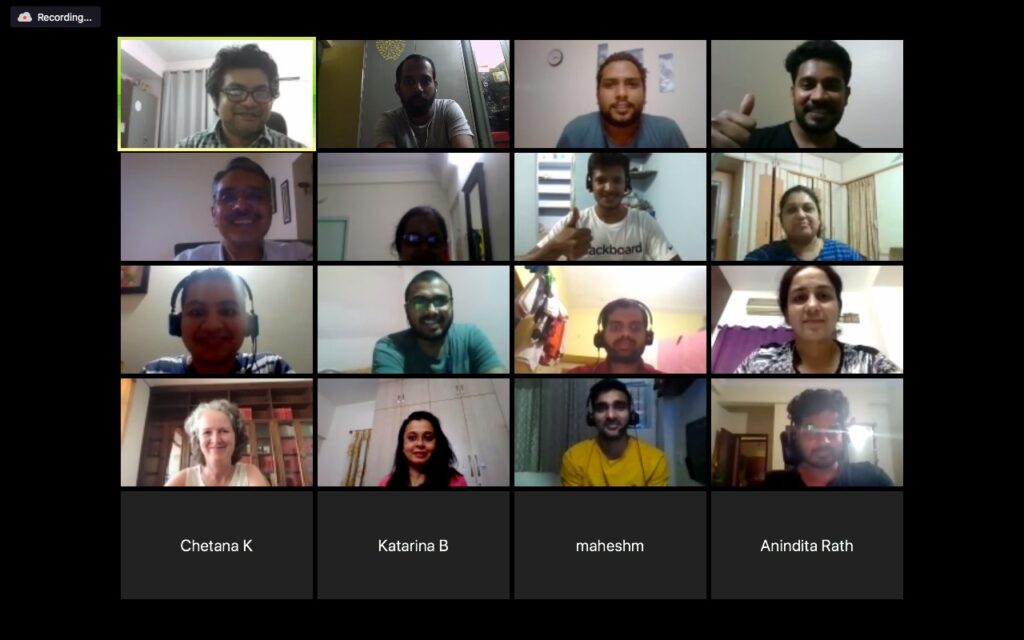 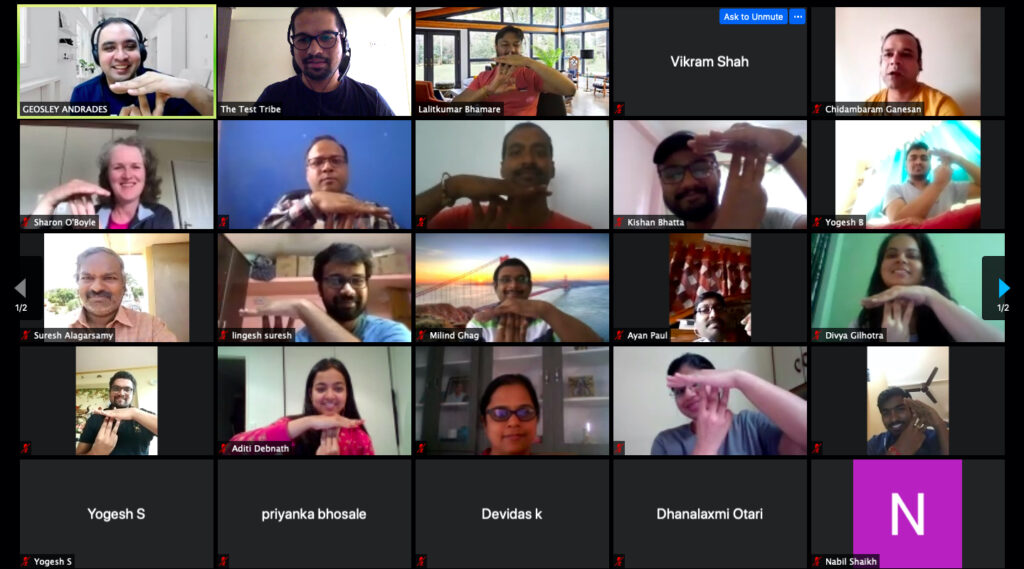 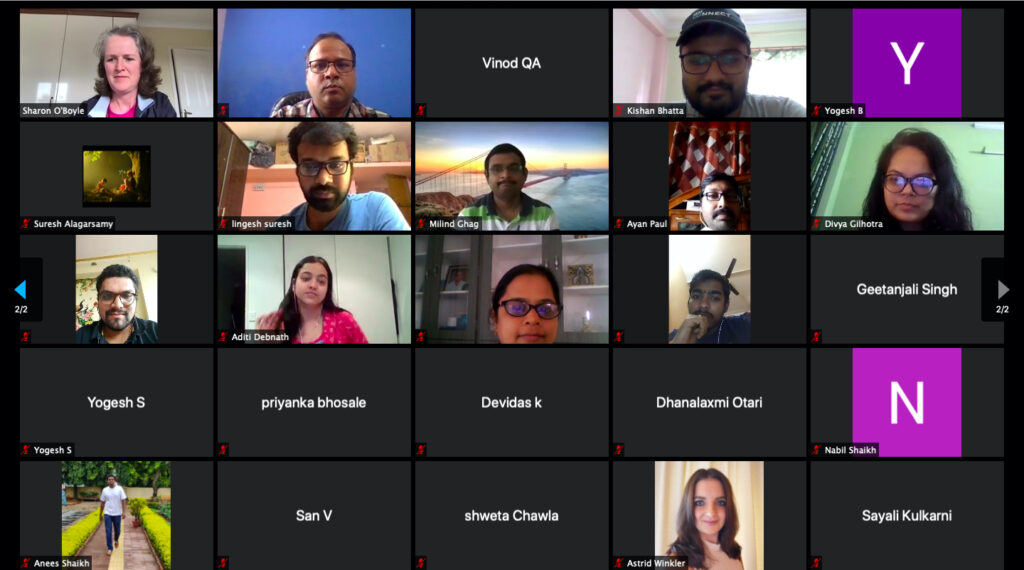 And while we did that, we planned on something which was long waiting. Atomic Workshops are designed for in-depth learning on small but important topics. And even bigger one in the form of a Bootcamp, as so many of you had asked for the right training for your bigger upskilling needs, though it is Automation or anything else.

We waited for 7-8 months and did a lot of behind the scenes work before we launched our first Bootcamp, in the form of Automation Bootcamp with Selenium & Java.

It’s close to 100 hours of training with close to 50 hours of hands-on hours. You now know why we call it the most extensive Selenium with Java training on the Internet.

After initiating this amazing Bootcamp, we also did a TTTribeCast Webinar with the amazing RobSab, and you may see collaborations where we host Rob again.

As I write this closing note for 2020, I can’t thank YOU, the tribe, which is the source of all our energy and motivation.

A lot of these you can watch for free on our Youtube channel here. Do not forget to subscribe.

While we did all this, our online Community continued to vibe awesomely with hundreds of amazing discussions. Yes, we crossed 5K members this year and as of now have 6300 Testers from across the globe as part of the Community. You should join us here if you are still missing out.

The number of events in a year may seem small to our previous scale, but the impact we made this year was a hundredfold more for sure and the credit goes to our amazing Think Tank, Team of Volunteers, City Heroes, and most importantly, You, our amazing amazing Tribe. Yes, I wrote amazing twice, intentionally, to show you how amazing you all have been. 😀

Would also like to especially mention Ajay and Geosley who have been an integral part of so many things planned and executed. Not to forget Balaji, Sandeep, and Kunal amongst others who always stepped up from time to time and did best as usual.

Congratulations on making through 2020 healthy and sound. Let’s march ahead now.

A lot of you may have questions about what The Test Tribe is planning for 2021. While I would avoid spilling the beans and let things unfold themselves at the right time, let me promise you that together, this would be our best year ever. We, You, and tons of learning with positivity.

We at The Test Tribe strongly believe in bringing value, originality, innovation, and coolness clubbed together, and we shall stand up to that.

Like you, we are also waiting for our Cities and Countries to open worry-free and to hit the ground again, but meanwhile, we will continue to do our best and add as much value as possible to your lives. #TogetherWeTestBetter

Let’s rock and make this the best year for us all. Ready? Give heads-up in the comments section.

Also, you have any experience, good vibes, or feedback to share, please feel free to comment or DM. I am always a DM away.

On that note, signing off.

Wish you all a Happy and Successful New Year.